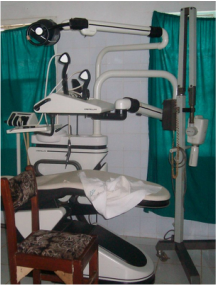 In July 2012, the Foundation took charge of  the shipment to the Holy Spirit Hospital, adjacent to UNIMAK and also belonging to the Makeni Diocese, of the modern equipment of a dentist’s surgery, a donation of an old professional of Legnano (Milan) who had ceased his activity.

A well-known Milanese dentist volunteered for the project of organizing and running with some colleagues a permanent and up-to-date surgery, a facility that was missing in Northern Sierra Leone. In June 2013 he flew  to Makeni to make a survey at the Holy Spirit Hospital, and arrived to the conclusion that the initiative was feasible, and suggested some actions to be undertaken whose costs where to be estimated. It was also foreseen to create a school for dental nurses and dental technicians. The whole initiative should be managed as a Social Enterprise.

The continuation of this project has been compulsorily postponed by the Ebola Epidemic.