A Look at Sierra Leone 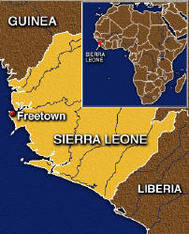 Sierra Leone is a small Country in Western Sub-Saharan Africa bordered by Guinea in the north/northeast, Liberia in the south/southeast and the Atlantic Ocean in the west/southwest.

It covers an area of about 72.000 sq Km and has a population of about 6.3 million inhabitants. Freetown, the Country's capital, seat of the central government and largest city, is situated on the Ocean coast and is one of the most important harbors in Africa. Makeni, located in the north is one of the Country's largest towns.

English is the official language, and Krio, a dialect derived from English and from a mixture of several African languages, is spoken by virtually 98% of the population, uniting all the different ethnic groups. A British colony since 1808, Sierra Leone is now a constitutional republic with a directly elected President and an unicameral Parliament . The President, who is also the Head of Government, is elected by popular vote to a maximum of two five-years terms. Next elections will take place in 2017. The Country became politically independent from Great Britain on April 27th 1961 and maintains very strict ties with the United Kingdom.

A large majority of the population are Muslim. Christians are about 21%. The Constitution provides for freedom of religion and the government protects this right. Differently from other African Countries, religious diversity doesn't give rise to conflicts.
Saint Lawrence Foundation Onlus
Via XXIX Maggio 18, 20027 Rescaldina (MI) - Italy
Phone: (+39) 0331.936310 - Fax: (+39) 0331.576737
Email: info@saintlawrencefoundation.org
VAT / P. IVA: 92039670150