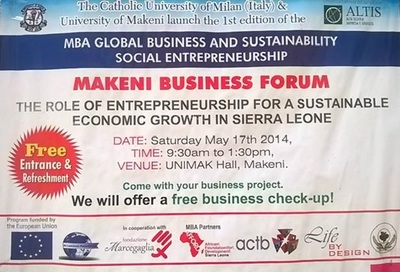 This project started in 2010 by establishing a cooperation with the Interdisciplinary Unit for Sustainable Economy of Università Carlo Cattaneo in Castellanza. The initiative included lectures in Social Entrepreneurship to the Makeni University teaching staff who were asked to transfer the relevant ideas and techniques to their students, with a view to encouraging them to change from potential “Job seekers” into “Job creators” for the benefit of their communities. It was foreseen that students should study and plan feasible small social business projects in their final Degree dissertations and that the most valuable of them should get a financial aid by the Saint Lawrence Foundation.  It was also foreseen the establishment of an actual Social Business Incubator to support the development of the best business ideas.

In June 2012, the Foundation’s objective of promoting social enterprises in Sierra Leone (the Cotton project had already started and other initiatives were under study) attracted the interest of ALTIS, the Management High School of Università Cattolica del Sacro Cuore.  ALTIS was engaged in establishing a pan-African system of MBAs for Social Business, with a view to developing a new generation of African Entrepreneurs able to combine social impact with economic success. This was in full accord with the Saint Lawrence Foundation’s targets, so it was decided to start by 2014 a MBA inside the Makeni University.  UNIMAK would bring into the project the necessary infrastructures and staff plus some of its social business ideas, whereas ALTIS would provide for the required financing.

In June 2013 ALTIS, in partnership with Taganza College of Nairobi and UNIMAK, won a call for bids of the E.U. and was assigned a grant to cover the expenses for the establishment in Makeni of three 12/15-months MBAs in succession, especially focused on Agriculture and Sustainable Energy, the first one due to start in the second half of 2014. It was foreseen that the Courses, from the fourth MBA on, will become self-sustaining.

These MBAs are based on an innovative formula according to which only candidates or young entrepreneurs bringing their own Social Business idea will be admitted.

Because of the Ebola outbreak, the beginning of the first MBA was postponed until instructions of the government concerning the reopening of the schools.

The reopening of UNIMAK in April 2015 allowed to resume plans with ALTIS for starting the first MBA Course for Social Enterprises. ALTIS have made in Sierra Leone an excellent work and the enrolments are amounting to a full class of 38 candidates, about 50% bringing a Business Idea related to Agriculture. In its turn, the Foundation is undertaking to promote and facilitate, through UNIMAK, the creation of Social Enterprises, with special regard to Agriculture (see update of the Project “Faculty of Agriculture at the Makeni University (UNIMAK)”.